A beautiful, October day – 20 degrees and sunny – and a perfect day to explore Potsdam, Berlin’s little, yet very pretty cousin, next door.  We checked out royal gardens (in pic below -Sanssoucci), a Russian colony, the Dutch quarter and of course, to keep it exciting, a random Stasi prison.

Potsdam is a historically rich city – from the Prussian Kings who lived here to its significance in hosting Churchill, Stalin and Trumen during the Potsdam Conference post World War II.  Not only that but I had heard a lot about Potsdam – that it was this beautiful, quaint little town (although it is the capital city of the state of Brandenburg) but I was waiting for the perfect day to check it out.  Although the weather in the summer is perfect for a trip to Potsdam, sometimes there are so many tourists that it makes it really uncomfortable to see the sights.  But this October day was perfect.

To get there:  we hopped on the S7 train from Hackesher Markt and that took us straight to Potsdam, although we were on it for about 45 mins.  We took our bikes with us so that we would be able to get around quickly in the city.  Although Potsdam is small, you can’t really explore it by foot.  Bikes are a great option.

Our first stop was one of the famous “quarters” in Potsdam: the Dutch quarter. This is about a 4-block area that was built in 1734 to be used by Dutch craftmen who settled here.  It was pretty crazy that the whole Dutch architecture was transported to Potsdam.  Yes, it is quite touristy here but it was just super neat to see. 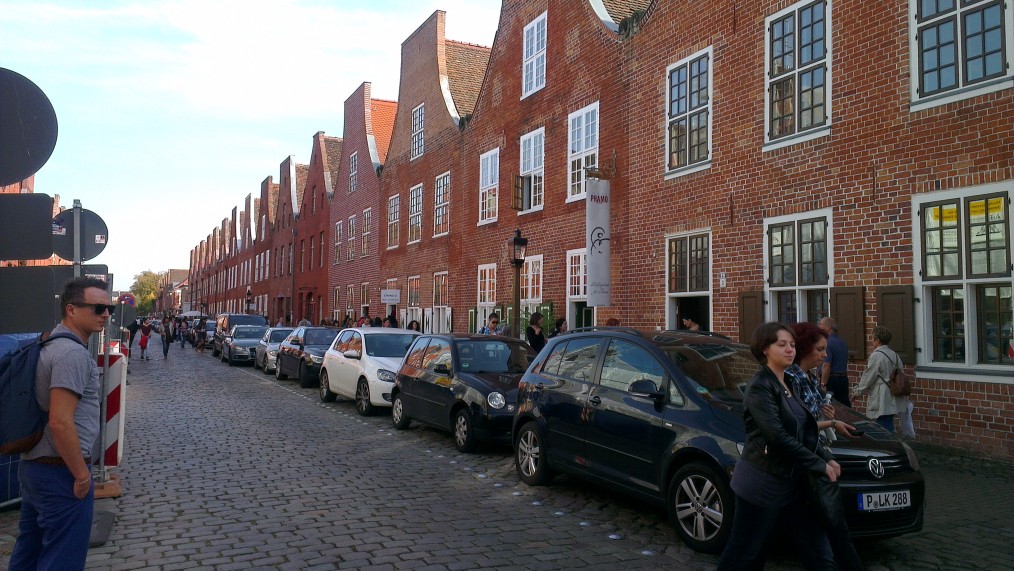 Then we continued our bike ride and came across the craziest thing.  All of sudden the landscape became flat and all these wooden farm-house types of buildings surrounded us.  There weren’t that many of them but it felt like we had just been transported again – this time…to Russia!

Yes, we were in the Russian colony.  This colony of 13 wooden houses were built in 1826 as a special request of the Prussian King, Friedrich Wilhelm III to house Russian immigrant singers.  Totally nuts.

We continued along the road on the way to a beer garden on the lake when we stumbled upon an old Stasi prison.  There are so many interesting reminders of Germany’s turbulent past everywhere – and sometimes they exist right alongside Germany’s more rich and beautiful past.  Here in this stunning, picturesque UNESCO town, there’s a Stasi prison used during DDR times to quell any anti-government citizens, Germans or Sovients.  They were kept here, tortured, interrogated, convicted or sent off to Soviet labour camps.  It was really eerie.    A picture of the cell block is below plus a picture of one of the punishment cells.

After that heavy stop, we continued along to Cecilenhof beer garden, enjoyed lunch overlooking one of the many lakes Potsdam hosts.

I love how close Potsdam is to the craziness of Berlin.  It’s nice to know you can get out of the city in a 40 minute train ride and be surrounded by truly idyllic surroundings.  But again, Potsdam also has its own craziness – even while we were there the Gardens and the castles were still packed with tourists.  I would recommend checking out Potsdam during the week if possible.  And, really, don’t forget your bike.  It made the sightseeing so much more enjoyable!